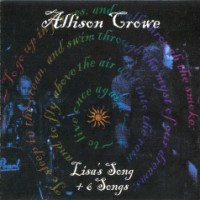 Simon Cowell would be very enthusiastic if Allison Crowe had joined the Idol. Even if she wouldn’t have won the Idol by some offbeat chance, she really doesn’t need it since she is already a star in her very own right.

Lisa’s Song + 6 Songs was released back in 2007, certainly an oldie but a goodie right here. It’s filled with acoustic, piano, jazz, rock and pop fusion tracks that defines Crowe as a musician completely. But perhaps, the best reason to listen to her songs would be simply to catch a glimpse of her powerful and ethereal vocals. She fills you with a longing to sit back and enjoy her music, much better than you would watching any TV show.

Before Crowe came out with Secrets as well as Little Light (Originals), she released this 7 song short album under creative commons.  With a hint of jazz and rock, incorporated into piano arrangements and great vocals, Lisa’s Song + 6 Songs is a magnificent piece of compilation that any true Crowe fan should listen to.

The title track, Lisa’s Song is a tribute to her missing friend Lisa Marie Young. It is a melancholic and heartfelt track that showcases the artists capacity to convey her emotions through her music. Her vocals are an ever powerful force that turns even the simplest of lyrics into something more, sending shockwaves of emotions to the listener. It is this ability to connect that makes Crowe a unique artist.

When you hear her sing for the first time, it’s not difficult to see a shadow of her various influences, ranging from the likes of Ani DiFranco, Beethoven, Tori Amos, Pearl Jam, Leonard Cohen, Led Zeppelin, Joni Mitchell, Aretha Franklin, Janis Joplin as well as the Beatles and even Nina Simone.

An all around musician, Allison Crowe certainly deserves more than what she’s getting now. It’s a rare talent to touch people and provide awesome music, and yet she does this almost naturally. Though the album is a bit short, it is a great listen; definitely worth your time.