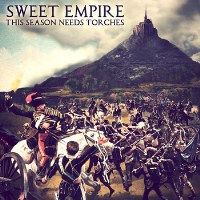 Sweet Empire is a group that hasn’t forgotten their punk rock roots. The band sounds like it would have felt comfortable during the 90s punk rock revival when the genre actually became popular again thanks to bands like The Offspring and Green Day.

This Season Needs Torches is a 12-track album offered by the band at a name-your-price option. Packed with what is essentially all out punk, the record breezes through one loud, energetic track after another.

A purely handmade, DIY record; the album has that freshly plucked punk sound that’s both nostalgic and easily enjoyable.

This quartet from the Netherlands specializes in an in-your-face rock approach. With punchy guitars, fast drumming and shouty vocals, the band gets their message across. Like typical punk bands, they makes sure their thoughts are heard. The only difference is that Sweet Empire takes on a more subtle approach, peppering their tracks with provocative lyrics designed to question and ponder particular issues.

For instance, opening single, Western Gates and the second single, On Fake Borders, contains lyrics about Western governments and immigrants as well as the conflict between Israel & Palestine. Other tracks like Torches, take on the issue of homosexuality while the more blatant single, Pro-Life vs. Pro-choice, is obviously questioning the legitimacy of abortion and how they feel about it.

Emma, is a track that’s dedicated to female activist, Emma Goldman. She was a known writer and champion of women’s rights. Dirt, on the other hand, starts off with a sample from a Simpsons episode. It then goes on to express the band’s stand for a vegan diet.

All of the tracks are really an expression of the group’s personal beliefs and convictions, much like sticking to the punk rock ethos of individuality and being true to who you are. Although generally the sound itself is nothing new, their lyrics and delivery are worth checking out. Grab the download over at BandCamp.