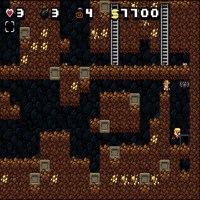 Derek Yu does it again. Spelunky is a probably one of the rare indie games that deserve to be sold commercially rather then played for free. It’s a fun, adventure game where you play well, a spelunker; exploring caves and looking for loot.

Spelunky is a game that’s fit for hardcore gamers and those who can catch up to the humor in Derek Yu’s games. It’s definitely a game worth getting yourself lost in. The game combines basic graphics with a very creative gameplay.

You control your character by using the arrow keys. Press down shift as you press forward and you get him running. Pressing Z will allow your character to jump and X lets him do some particular action as needed. By default, your little archaeologist will use his whip when pressing the X buttton. Pressing C will cycle you through bombs which are helpful for blowing up walls. Essentially, your goal is to head for the exit door in order to pass each level.

Collecting gems and jewels is also essential. You can use this to buy other important items like guns, ropes etc. Of course, you get to play prince charming as well  by saving a damsel in distress. By doing so, you gain extra health and money.

Perhaps the greatest allure of Spelunky is the fact that it contains Rougelike elements in its gameplay. This makes the game very diverse and exciting to play every single time. Even though you might become frustrated at the difficulty of some of the levels, it’s this challenge that makes the game even more addictive.