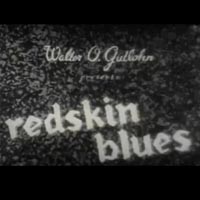 Many of you reading this post would mistake the piece of work for MGM’s classic “Tom & Jerry”, but its not so. This is Van Beuren’s Tom & Jerry episode of 1932 Redskin Blues.

This particular episode is high on action, with “Boom-Bang” from guns and cannons (a 1932 Mission Impossible one might say) with the two iconic characters fighting off the ‘Red-Indians’. Watching a movie like this nowadays is priceless in making us laugh and relive the good olden days. Nostalgia is the theme for this one!

In their own funny demeanor the cartoon displays the antics of the protagonist and defending one’s life by avoiding flying-hammers with the baseball-bat all of course while experiencing success with every single shot. A hilarious moment never falls short in this movie. Being an old classic, there is not much room to talk about graphics, SFX, animations and the likes. Its a legend in its own right with ample fun-watching for the entire family.

If you think the lack-luster animation is a complete thumbs-down to this movie, let me tell you, the music co-ordination is so good that you will wish you were in the movie instead. So, do Tom & Jerry survive the attack by the Red-Indians? Umm, well you have to watch it for yourself.