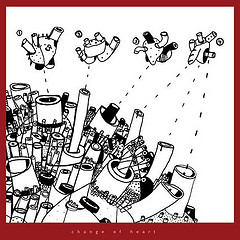 Tim Fite is an American singer, song-writer from New Jersey living and working in Brooklyn. His past releases widely varied in style going between indie to alternative to country to hip hop. He received critical acclaim and won many new fans with a 2006 hip-hop album entitled “Over the Counter Culture” in which he criticized the modern culture of consumerist and greed. After multiple big publications named it among their Top 10 albums of 2007, Tim Fite decided to make a statement and not release the album commercially (= give it out for free). Now Tim Fite is out with his newest album, “Change of Heart”.

“It is a bit different from my other recordings, because it doesn’t have anything to do with the outside world. I made Change of Heart while working on Fair Ain’t Fair and sorting through the wide array of emotions that result from a broken heart. For this reason, I ask that you handle these songs with care, as they are very fragile.”