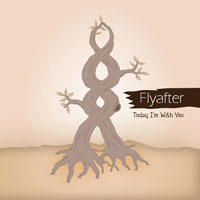 Flyafter: Today I’m With You

Flyafter is a Jakarta based band specializing in producing “beautiful pop melodies carving their way through a dreamlike foggy electronic soundscape.” Part of 23 Seconds Netlabel, Today I’m With You is the band’s (Rully Fahrezzyf, Hannan Jaya Mahardika, and Rully Luandri) second release after the more acoustic sounds of the self-titled EP. In their music, Flyafter combines various elements beginning from electronic, acoustic, to techno, shoegaze, indietronic, and pop. Although the band has been performing around Jakarta for quite some time now it was not until 2010, with the release of their first EP, that their music crossed continents for the very first time.

Flyafter was formed back in 2004 by two of the band’s original members, Rully Fahrezzyf and Hannan Jaya Mahardika, playing British Indie and Norwegian Alternative influenced music. However, since the addition of Rully Luandri, who brought with him a set of beautiful electronic sounds coming straight from his “music machines”, the band quickly found their own unique path.

Soon after composing couple of new tracks, some of Flyafter’s friends from the local radio station took the recordings turning them into local hits. Ever since then the band have been invited to play at numerous gigs in Jakarta and cities around Indonesia and recorded it’s first two EPs, both of which were made available to their fans as a free download through various sites on the Internet.

Taking aside a rather rough first couple of seconds of the “The Wonderstar” the rest of the track provides a great example of the pretty sweet sequencing, synths, and drum machines all operating within their very own indietronica pop world. All in all, Flyover is a nice listen so grab a download.