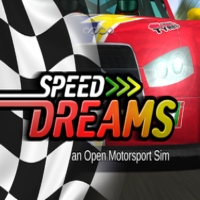 Speed Dreams is the former Torcs-NG, but with a host of improvements. There are lots of cars, better graphics and realistic physics engines. It’s a racer all right, but precision driving will be necessary. It is cross-platform and you can play it in Windows, Linux and Haiku.

Players can load different types of physics engines; you can use racing wheels and pedals, mouse, joysticks or keyboards. Advanced gamers can create custom modes by changing the text configuration files. The major difference from TORCS is Career Mode. You can earn points and move up in the rankings. You can race against various opponents and assorted tracks. You can select from various car classes.

Aside from the physics, rain can fall during the race. You can race during the day, night or have the sky change dynamically. This has an effect on the game’s physics. You’ll also see clouds moving and rain particles. Numerous camera modes can be used including outside and camera views. This is nice, because the game has some pretty impressive graphics.

Speed Dreams allows split screen mode for multiplayer. Online multiplayer is currently being developed. More cars and tracks are being added to the game, increasing its longevity.