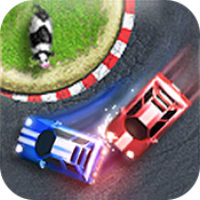 Vs. Racing brings arcade racing to the iOS. Developed by Maciek Drejak Labs, it’s got some real smooth graphics, and the gameplay is easy to pick up. It’s a fun racer that you can play over and over. While there are plenty of twists and turns, the fact that it’s an overhead racer makes this quite easy.

When the game starts, you’ll be asked if you prefer the usual controls or their new tilt control. When you play VS Racing you just tilt your iOS device to move your car around. This control makes it easy for you to turn and navigate the obstacles.There are 34 races you can compete in here.

It’s true the tilt control is used by other iOS games but what makes Vs Racing different is that the controls are well implemented. The fact that the game is overhead means it feels like you’re rolling the car.

This isn’t difficult to learn, as there’s a helpful tutorial included that will show you how it is done. You can also tap a designated spot on the screen and steer right or left, or you can utilize the virtual analog. That pops up at the corner. Together with tilt controls, it gives you plenty of options to play the game.

The 34 races are spread throughout the six courses, so it doesn’t feel like you are playing the same game over and over. The game also looks good, with detailed visuals and crisp textures. Vs. Racing makes full use of the iOS retina feature, so it really looks good. Vs. Racing also has local multiplayer support so that half a dozen players can hook up and play.

Related Links:
VS Racing on iTunes
VS. Racing Official Website