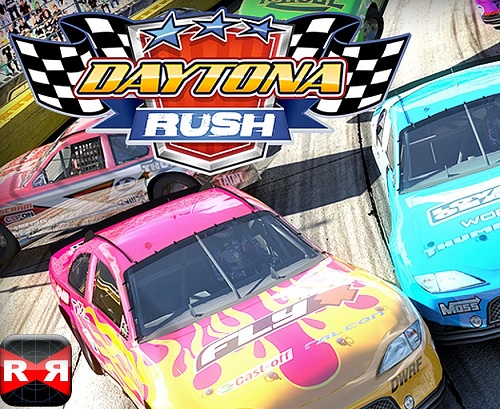 Daytona Rush from game developer Invictus is best described as an endless racer. It’s not the most original game on the iOS or Android, but it has certain qualities that will have you coming back for more. Part of the reason is the graphics, another is the simple controls, but mostly it’s due to its simplicity, which is a nice change from more complex games.

Once you’ve installed the game it will just take a few moments to get used to the controls. Basically you just tap to the left or right to make your stock car change directions, and this is something you’ll be doing a lot since there are a lot of cars on the track. The early races are easy though and give you time to get used to the conditions.

As the game goes on however, you’ll need to do quite a bit of ducking and diving to avoid crashing. Another interesting twist in Daytona Rush is you need to refuel your car, but it isn’t as simple as it sounds. At certain intervals you’ll need to stay in the left lane to refuel, but you can only stay there for a certain period otherwise it will turn red and disqualify you.

Aside from racing, the game has various side missions so you can earn money and upgrade your car. If you make enough money you can ditch the upgrade and buy a new car altogether, something you might need in the latter races. The nice thing about Daytona Rush is you get everything at once: that’s right, no need to win x number of races just to unlock features.