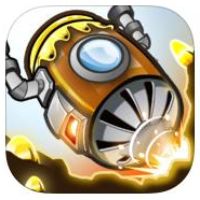 Gold Diggers is a cool little game from developer Gamistry. The best way to visualize it is to think of an endless digging game. However, you shouldn’t mistake this for just another runner clone as there are a lot of unique features here that will keep you playing for a while.

The idea behind Gold Diggers is that you are in charge of a tram which you will use to dig and excavate gold. The game play sounds simple and it is, which is one of the reasons why Gold Diggers is a lot of fun. In the game you don’t have to worry about the Tram as it will go down automatically. However it is up to you to determine the direction it will go to.

You control the Tram’s direction using a virtual wheel that is set at the screen’s bottom, and you can move this at the right or left. The process is very intuitive and you won’t have any problems learning how it works. Even if you’re just playing for the first time you will have no problems making turns and getting past the obstacles.

Most of the obstacles here are flame based, and there are also some rocks that you have to get around. You also have to fight the occasional monster while avoiding lava trails. The underground world in Gold Diggers is pretty crowded but you can use your Tram to get around it and grab a machine gun as well.