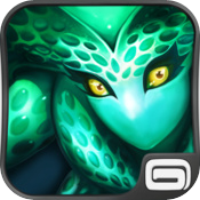 Heroes of Order and Chaos

Heroes of Order and Chaos is a MOBA (multiplayer online battle arena) from game developer Gameloft. Offering smooth graphics and addictive gameplay, you can fight 5v5 or 3v3 in real time, and there are also options for solo matches, co-op and player vs. player.

When the game starts you begin at level 1 and have a thousand coins that you can uae to purchase weapons, armor and equipment. You don’t have to worry about running out of coins though, because you can earn them by killing your opponents. In addition, all those kills helps your character level up and get the ability to buy even more powerful equipment. This is one of the best features of Heroes of Order and Chaos, as you are not forced to buy IAPs just to get coins.

Heroes of Order and Chaos also gives you more than 30 characters to choose from, ranging from fighters to mages. Each character is unique and has special skills that can be enhanced during battle. One of the coolest skills here is the one where you can trap your opponent in a cage until their health reaches zero. And that is just one skill and there are many others that you can have fun with.

Gameloft has done a great job not just with the gameplay but with balancing the characters’ skills as well. There are three maps here and each mission takes a while to complete so you’ll be playing this for a while, and that’s all right because this is a cool game.