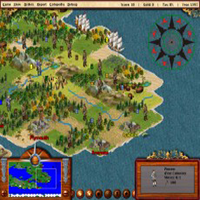 FreeCol is an open source resource management / strategy game inspired by the classic game Civilization. It incorporates many elements from the classic game as well as new ones. Players command pioneers as they attempt to colonize the New World. Your choices are Russian, Swedish, Danish, Portuguese, English, French, Spanish or Dutch explorers.

Just like Civilization, you begin with a handful of colonists. Through management of resources, you’ll be able to conquer the New World. There are single player and multiplayer options. The interface has been souped up and you can configure a lot of settings before starting a game.

FreeCol allows you to use maps based on Australia, the Americas and Africa. You can even create a custom map. But its real strength is in the details. Players can focus on negotiating with native American Indians for land, managing resources, or developing your military. You have to manage tobacco, cotton, sugar and other crops.

Raw materials are then developed into various products. You can use these to trade with native Indians or other settlers. Players can train colonists to be expert fur trappers, lumberjacks, workers, politicians etc. Skills can be taught and schools built. There is a lot to be done, and you can easily spend hours playing this game.

If you get the colonies behind you, independence will be declared. The Crown will dispatch Expeditionary Forces to counter this. The emphasis now shifts to strategy, diplomatic leverage with settlers and natives and planning. Anyone who’s ever played Civilization or similar games will feel right at home here. However, the graphics are much nicer and the sound is engrossing too.

Freecol is for Windows, Mac OS X and has a platform independent installer.