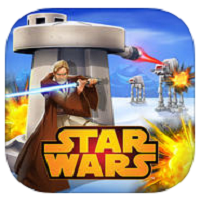 Star Wars: Galactic Defense is a tower defense game from Dena, and as you might expect it comes with your favorite Star Wars characters and it has all the elements that make tower defense games very enjoyable. It has the features that make for a fun TD game, and it delivers.

One of the strengths of Star Wars: Galactic Defense is there are a lot of maps and various difficulty levels, ensuring the replay level is high. You see all the famous Star Wars characters and some not so well known ones as well as they go in and fight. There are special moves available in the game and a leveling system is available too.

The power up system is one of the most comprehensive among all tower defense games on mobile, and numerous upgrades are available too. The maps have a lot of variety and you’ll have no trouble telling one from the other. Execution and selection is very good, and you can unlock many of the characters without the need for a lot of currency.

Like other freemium games Star Wars: Galactic Defense uses an energy system that runs down after a while, but it replenishes very fast. As a tower defense game, it employs various kinds of towers that add another dimension to the game. If you are into tower defense games, you’ll be happy with the mechanics in place here as they’ll be very familiar.

Star Wars: Galactic Defense takes a different approach from the other Star Wars games, but retains the characters to give it the same feel, so overall it’s a very good game.