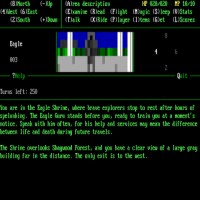 Blood of the Chameleon

Initially developed back in 1999, Blood of the Chameleon is a text based game worth checking out. It was created by Thomas Lipschultz and described as “a uniquely historical” role playing game.  The game does feel a bit “ancient” compared to newer and fresher games but this doesn’t mean that it’s not worth playing.

Your main objective when playing is to kill the evil “Chameleon.” However, in order to do so, you need to find and destroy four tears that can only be found by exploring the lands. Everything in this game feels like a classic. You even have to control the game via the number keypad.

The game takes you back to the BBS era and lets you explore the land of Vulteria. Your job is to kill off the evil wizard that has the capacity to change shape, hence dubbed as “The Chameleon.” The wizard’s whereabouts are actually well-known but he was wise enough to seal himself in a barrier which requires four tears, scattered all across the land, in order to break it.

Collecting the tears won’t be a piece of cake but with a little magic and some tenacity, you should be able to pass through the various obstacles. Although the game very old school, there’s still a lot of fun in here. The simplicity of the game and the geeky BBS makes this game a must-try for plenty of geeks out there.

Those who are used to hardcore graphics and rendering would do best to stay away. If you don’t like reading text, then you won’t find anything entertaining about this game either, but those who actually know what a BBS is, are bound to like this one.