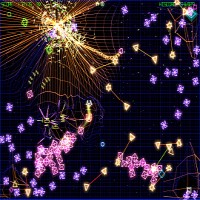 Never thought that a programmer’s art could be appealing? Then let Grid Wars prove you wrong. Grid Wars is a free game that’s based on the minigame Geometry Wars. Despite its simple aim and shoot gameplay, it is one of the most entertaining shooting games around.

With simple gameplay, colorful graphics and straightforward controls, the game is a definite winner. It has been tagged as one of the “most fun shooting games” around and pretty much you’ll understand why once you start playing it. The main objective for Grid Wars is pretty simple, kill anything that moves; maneuver properly to get power ups and no physical contact or else you die! In spite of the fact that it was based on Geometry Wars, there is no doubt that Grid Wars is far more superior in terms of graphics, gameplay and design.

The beautiful yet simple graphics is enough of a testament that you will enjoy playing the game. It’s controls include simple mouse and keyboard strokes but of course, you can use a game pad if you like. Levels are non-existent but you will see a noticeable difficulty every time new enemies show up.

Then there are black holes to take care of and deal with. If they blow up, they will  all your enemies and also cut  back your multiplier to 1, so a perfectly timed balancing act is important if you want to win this game.

The game has undergone several revisions and creator Mark Incitti has released the final version and has moved on to other projects. Essentially, Grid Wars is one of the most engaging and fun shooter games available. Above everything, it’s all free so no need to spend even a dime just to play a great game on your PC.