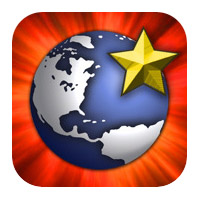 If you loved strategy games like, Risk, back in the day; you might find a new bestfriend in the presence of Lux Touch. This is only the lite version of Lux Deluxe but you’ll find that it’s more than enough to give you a great time.

The game sees you looking to take over the world by expanding and owning continents. It features simple but colorful graphics, a somewhat complex gameplay (especially for those who have not tried Risk before) and a cool interface that’s heightened by the touch function of the iPad and iPhone screen.

For those who haven’t played Risk before, you might be at a loss as to what to do with this game. When you first start out, it provides no instructions on how it’s played so pretty much you’re left on your own from the get-go.  However, fear not, once you learn the basics and get used to it, this game should become a breeze and quite enjoyable.

Your goal is to defend your territory while destroying all the other places owned by your enemies. In the map, all the territories marked blue are yours. The black, orange and green ones are your enemies.  When playing, the goal is to conquer every single continent. Whenever you do this, you obtain a cool card and once you manage to create a set with your cards, you can use it to gain bonus armies.

The game lets you start off with several blue countries. Each country will have a corresponding number that indicates the number of armies/soldiers on that particular continent. One thing to remember when you’re still starting out though is to never attack a country that has a higher number of soldier than yours.

Gameplay can become really fast. One minute you’re watching a map with both you and your enemies having the same number of continents while in the next instant, he’s already taken over half of the map leaving you pushed down to one little corner. The good thing though is that even if it’s already like this, you can instantly turn the game around in your favor. It might take some time to get used to the overall gameplay but once you do, it’ll be a piece of cake.

Sound effects are also added to give the game a nice touch. Even though the game is a bit tricky to master when you’re still starting. Pretty soon, you’ll get the hang of it and for sure will spend a great deal of time playing this one. It’s quite addictive and definitely fun.
Related Links:
Lux Touch Official Website
Lux Touch on iTunes Website
Lux Touch on CNET
Lux Touch on AppShouter