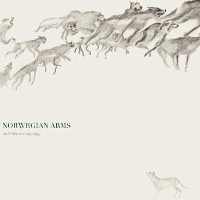 It all started with a Mandolin, a musical instrument from the lute family functioned to play light classical string repertory, and a batch of songs written while shuttered away during a year in Siberia shared between two friends to birth what we know now as Norwegian Arms.

With just these simple instruments, the group was able to give body and weight to their earnest, upbeat and thoughtful freak-folk.

Wolf Like A Stray Dog is an album about the quest for identity, a resistance to permanence, adapting to new environments questioning one’s knowledge and perspective, and never being satisfied with what you know.

And Then I Found Myself In The Taiga starts off perfectly with its mysterious instrumental play exuding wanderlust and curiosity even more to the listeners. Wolf Like A Stray Dog which shares the same title as their album is distilled and neatly packaged into sonic bursts of intense energy.

My New Toy Piano is easily digestible with no trouble understanding the inspiring message underneath. Proof Of An Art Object somewhat stays true to its name by showing that the group’s songs are instantly memorable, well-crafted and melodically rich. And lastly, Pu-Erh is a straightforward deeply personal song that sums up the theme of the whole compilation.

People seem to find it difficult to classify the group, having said everything from “freak folk” to “mando punk.” But they shouldn’t be discouraged because beneath the mask of uncertainty and ambiguity lies a vast amount of talent and gift.