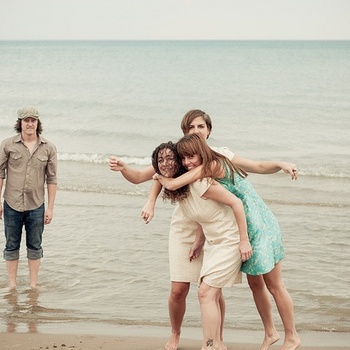 Singing In The Abbey: Winter Demos 2011

On their Facebook page, Chicago band Singing In The Abbey describe their sound as Thom Yorke meets Julie Andrews. I can see where they are coming from. On Winter Demos there is a dramatic theatrical flair that is balanced by the strings and indie pop structure.

Annie Higgins plays piano and sings; she has put this band together centered around her piano and songs and is joined by Donna Milleron on cello and vocals, Katie Cooperon on violin and vocals and the lone guy, Jason Toth on percussion.

“The Blue Lake Special” features a nice balance between the strings and piano and has a bit of one of my favorites, the lonely trumpet.

On “EC Hughes” Annie sings, “Now swing on the highest swing, now knock those fuckers down, take another look, who’s standing now” which she says as a statement not a question. Though the language is a surprise, it gets the point across.

“Winter Demos” certainly takes after it’s title with both the music as well as the lyrics. It is a captivating listen that you should check out.

Singing In The Abbey has a new album out called Wake Up, Sardis! that you can find on their band site linked below along with a video of the band in action playing “Winter In Chicago”.