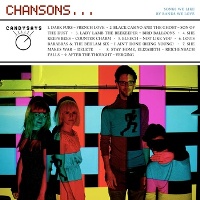 Chansons is a compilation CD of all Candy Say‘s ‘favorite tracks by their favorite artists’. Though not a single track is performed by Candy Says, it opens up a lot with the group’s various musical styles.

French Love by the Dark Furs is a sexy, dreamy pop. This track screams “indie” all over it. Suzanne May‘s sexy interpretation for this dreamy love song is amazingly captivating. Candy Says’ musical style is a reminiscent with “French Love” and thus share the same bond with the “lo-fi chic” and alternative tunes. It is a perfect travel companion that will chase your blues away. Trivia: In Candy Says’ EP called Kiss Kill, Dark Furs were the ones who helped to remix the said track. No wonder these two groups enjoyed similar rapport in music.

Son of the Dust by Black Casino and the Ghost might be lyrically simple at a glance but accompanying it with Elisa Zoot‘s mystic vocals, and the instruments as it creates a musical genius that is Son of the Dust. It is an epic song, hands-down. It is like a journey-to-the-past thing, with the visions of the cathedrals (or may be because of the song’s reference with Christianity). No wonder Candy Says choose this track to be part of the compilation as it also mirrors their musical sensibilities. This is definitely the favorite song in the compilation.

I Ain’t Done (Being Young) by Louis Barrabas & The Bediam Six will remind you of Peter Pan. And while you are it in visualizing, the peculiar and playfulness of the musical style against the unapologetic vocals will smash all your hesitations. This track is interesting because it is too different, too fun in a sense. Listening at this track will wake you up, and will force you to get up and play—in that case, just like Peter Pan who never gets too old to play.

Candy Says describes their music as “lo-fi chic pop”, and just seeing and listening to this compilation will make you agree on it. Be sure to check out this quirky, dreamy, and one-of-a-kind compilation and hey, the creation of Chansons is actually for the good cause to help the Alzheimer’s Research UK.