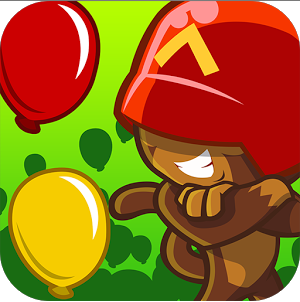 Tower defense games have been around for a long time, but Bloons TD Battles by Ninja Kiwi throws a fresh spin into the genre. In the game you control a bunch of monkeys as they throw ninja stars, bullets, hurling darts and other bladed / sharp against their biggest enemies: balloons.

This is the latest in the Bloons TD Battles series, and it continues the popping of balloons theme. The difference here is your monkeys go up against live players. Here you command a regiment of monkeys that are specially equipped and trained to eliminate those menacing balloons using a variety of weapons. The most basic weapon in your artillery is the dart, which you hurl at the balloons as they float by.

You can also avail of the services of ninja monkeys armed with shurikens that can go through several balloons. As the game goes on you will gain access to more powerful weapons such as glue guns and snipers. For heavy duty fighting you can use gun helicopters and other heavy machinery.

In addition to this you can also get additional gadgets that will help you prevent those balloons from infiltrating your defense. In fact you can even use cannons. Every time a balloon gets through your defense your health bar goes down, so you need to play good defense here.

Bloons TD Battles should look familiar with anyone who’s played these types of games before. However in this game you have more options and modes to choose from. If you tower defense games, you’ll get a kick out of this one.