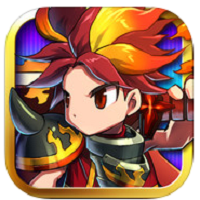 Brave Frontier takes elements of the classic RPG and brings them to the Android and iOS. Developed by Gumi Inc, the game incorporates classic RPG along with elements of card collecting, and the result is a satisfying game that that will please fans of retro games and new gamers alike.

In Brave Frontier you need to save the land of Grand Gaia, where power can be found but it is infested by some powerful creatures. You play a Summoner who has been given access to the land. Your guide Tilith will introduce you the game’s basic concepts. This is good because to succeed you need to learn how to summon units, combine them and use them in combat.

A lot of the action in Brave Frontier takes place in turn based battles where you go up against different kinds of creatures. During each quest you have a helper and other companions to help you out as you’ll face boss battles as well. Just like a good RPG game, every creature, friend or foe, is associated with a certain element, and it’s necessary you learn how to match these elements to win in battle.

Brave Frontier requires players to do a lot of strategic thinking and planning, but you’re not alone as Tilith does help you out a lot. Controls are easy to learn as you just tap a target and attack it. Another cool element in the game is your fallen foes drop Karma and Zel, currencies you can use to gain more power and units. Overall, Brave Frontier is a cool game.