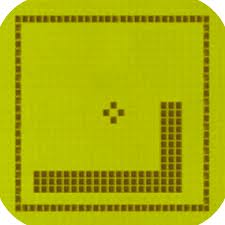 If you’ve been playing mobile phone games for a while, then you’ve no doubt heard or tried Snakes before. Now game developer DSD 164 has made Snake 97 available for the iPhone, Windows Phone and Android, and it’s every bit as fun and challenging as the original.

The game plays pretty much the same way as the classic one, and the controls are just as simple. The snake moves forward all the time and you just have to redirect it left, right, up and down, and your goal is to have the snake eat the pellets. Just like in the classic game, the more pellets the snake eats the longer it becomes, and the game ends when the snake hits a wall or itself.

That’s all there really is to the game, and if you look at the game it looks exactly like the original and plays like it. The gameplay itself is simple but it’s very addictive and makes you want to give it a try again and again. If you love retro games then Snake 97 is going to strike a chord in you, and even if you haven’t played this before, it’s something you need to give a try as it’s a lot of fun.

Bottom line: Snake 97 is a great retro title and the concept, while simple, does a great job in drawing you in. It’s simple and straight to the point, and if you’re looking for a casual game this will be right up your alley.