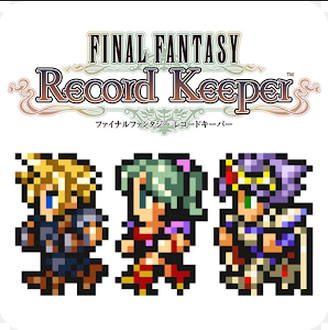 Final Fantasy Record Keeper from DeNA is just the latest in the Final Fantasy games to appear on mobile, but if you’re a fan of the series you’ll want to add this to your collection. Free to play on Android and iOS, it’s a typical crossover where you create a team from the characters in the Final Fantasy I to XIII games.

The game has a retro 8 bit / 16 bit look and plays like the classic FF, and it’s a blast to have an FF VII character like Cloud going at it against FF X’s Wakka. It’s also good to note that the game carries the original soundtrack from the original titles, which adds a high degree of nostalgia.

FF Record Keeper also has an engaging gameplay. Your goal is to manage a library that holds the events from the previous FF games, giving you a convenient excuse to play them again. The game doesn’t have any cut scenes, but you do get informative text and some pretty cool pictures that drive the narrative.

While the stories are understandably abridged, it’s still a lot of fun and put well together, and just like other role playing games your chances of success depends on how well you manage your character’s abilities and equipment. By winning battles your character will be able to earn new spells and weapons, and you can fuse them to become even more powerful.

There is an IAP option here, but if you play Record Keeper long enough you won’t need it since the items you need eventually show up. Overall, Final Fantasy Record Keeper is a worthy addition to the franchise.