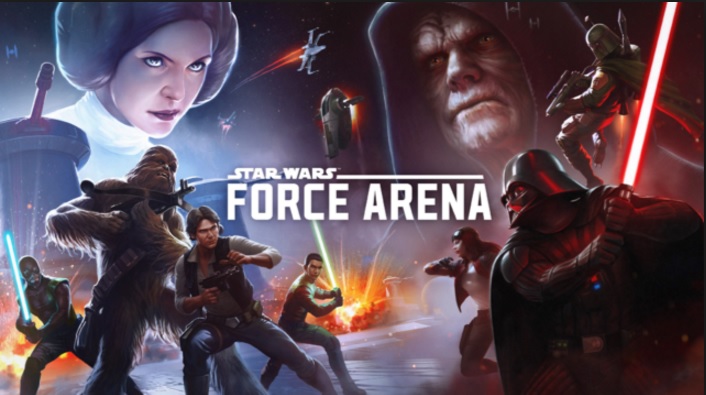 There’s no shortage of mobile Star Wars games, so is there anything in Star Wars: Force Arena from Netmarble that sets it apart from the crowd? Well, it looks to be the first to have elements of MOBA and card collecting, and this translates to a lot of exciting PvP battles.

Your goal is to destroy the enemy’s base. And if both bases make it after the 3 minute mark, the one that damaged the turrets can turn the match in their favor. The forces for each player are admitted into the battlefield via cards displaying Star Wars characters, weapons and vehicles. These cards require energy, and once you have the right amount of energy, just drag the card into battle. Your leader character also has special capabilities you can use by tapping the big button.

There are two lanes on the maps, the movements are tap based and the battles are short but engaging. You can also try the 2V2 mode, and it’s easy to find players to train with. If you’re new to these games, you may want to start with the practice battles to get a grip on things.

The graphics are nice and you’ll find familiar characters from all the Star Wars films up to Rogue One. The more you play, the more you’ll be able to advance by collecting cards. Fighting and winning PvPs also unlocks more bonuses, so there’s plenty here to keep any Star Wars fan happy.