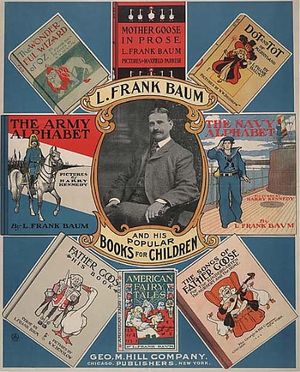 American Fairytales is a collection of 12 fantasy stories written by L.Frank Baum. This book is not as well-known as Baum’s Wizard of Oz or Father Goose but it is just as enduring as the two for its satire and dry wit, two startling elements for a fairy tale book. Baum abandons his trademark high fantasy for a nonsensical but wildly imaginative book about curious little girls, majestic polar bears, enchanted candies, and treacherous butterflies.

If you love classic fairy tales as I do, this is a must read! The stories are entertaining, like sparkling little gems, and obviously written for adults. According to Wikipedia, George M. Hill, Baum’s publisher, “sold the serialization rights to the twelve stories in AFT to five major newspapers, the Pittsburgh Dispatch, the Boston Post, the Cincinnati Enquirer, the St. Louis Republic, and The Chicago Chronicle. The stories appeared between March 3 and May 19, 1901; the book followed in October.”

Here’s the list and a short summary of each story:

1. “The Box of Robbers.” Martha opens a magical box to reveal greedy brigands who seek to rob her home.
2. “The Glass Dog.” A greedy glass blower gets his just desserts as he uses a powerful wizard’s magic to selfish ends.
3. “The Queen of Quok.” The kingdom of Quok is financially ruined by the irresponsible and now dead king. Thus, a disagreeable old lady tries to buy the queenship and marry the impoverished boy king but unexpected fortunes save the boy.
4. “The Girl Who Owned a Bear.” A little girl opens an enchanted book that brings to life the drawings on its pages. Will she be able to outwit them all?
5. “The Enchanted Types.” Kooks are magical creatures that live forever. One of them unwittingly sets things in motion to please both birds and humans.
6. “The Laughing Hippopotamus.” Keo is a merry hippopotamus that is enslaved by a greedy tribesman. Will he ever be released from this burden?
7. “The Magic Bon Bons.” An ambitious and rich young woman tries to buy talent but the plan backfires when she leaves the enchanted candies on a store.
8. “The Capture of Father Time.” What happens if you take Time as prisoner? A young cowboy finds out.
9. “The Wonderful Pump.” Two humble couples are corrupted by sudden wealth from the King of Beetles.
10. “The Dummy That Lived.” If mannequins were alive, how will they deal with this confusing world?
11. “The King of the Polar Bears.” A strong and wise polar bear seeks to regain his rightful throne.
12. “The Mandarin and the Butterfly.” With hate in his heart for little children, a Mandarin tries to use a butterfly to evil ends.