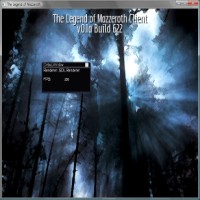 For all those mmorpg fans out there, here’s another game that you can add to your growing list of favorite role playing games, The Legend of Mazzeroth. Playing this game will take you to a high quality 2D world where you set on a quest to discover your hidden powers as well as find out why a shift in balance is happening.

Despite its typical storyline, The Legend of Mazzeroth provides a fun, high quality environment where you fight off dragons and hone your skills. As of the moment, the game is being developed fully as an offline game and will then be converted into an online game. A short description of the game is provided on the official Wiki site for the game, it goes:

“A large dragon of uknown origins named Mazzeroth is terrorizing the land. He is sealed into a mountain by Warren who is killed in the process. Many years later two brothers discover that they are decendants of Warren and set off with their friend to understand their hidden power and discover why the balance in the world has begun to shift.

During their travels the brothers and their friend meet four elemental dragons and learn to master each element. With their newfound mastery they are able to defeat Mazzeroth and seal him back in his mountain tomb.”

The main characters in the game are Derek, Anna and Alex. Each character has the option to learn any skill or ability as long as his or her levels are eligible for it. As for the skill system , it can be divided into elemental properties as well as general skills like melee, ranged etc.

For the online game, players will be able to chat, trade, make friends, create guilds and go on PvP mode. Other planned options include incorporating mini-games and NPC’s will be ever present.

The source code for the game is protected under a GNU General Public License version 3 (GPL) license while much of content or non-source materials like maps, charts etc., are under a creative commons license.