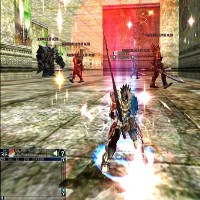 Can’t get enough of MMORPG games? Then here’s another one you can sink your teeth into, Gekkeiju Online. This game is absolutely free so you can go ahead and waste plenty of  time playing with other gamers online. Before going for the dive though, it would be helpful to know that the game is not exactly considered by its makers as MMO. Unlike most commercial online RPGs that are fully finished once it is released, Gekkeiju is still a work in progress. The game is constantly updated and treated as an “independent project” by its makers.

Like most rpg games, there are several characters you can choose from, nine to be exact. Each of these will have their pros and cons so it’s up to you to make your character work for you. Gekkeiju essentially features anime like characters in a fantasy world. Now, this may seem like just another game rpg but the game actually has several redeeming factors. For instance, the game prides itself for having a different type of leveling system compared to other games. It uses NPCs to help you advance to the next level. It becomes more than just killing monsters and gaining experience. The character options are also made to be more personal. A player can choose what kind of traits his or her character will have, like which god they would pray to. NPCs that would allow players to switch races can also be found, so there won’t be any need to create an entirely different character if you want to know what it’s like from the other side.

When playing the game, you get to choose from several characters; either become a warrior, commoner, magic user, divine arts, and dark arts. Any of these characters are capable of joining guilds in order to learn new skills and powers.

Unfortunately, the graphics for the game is a bit substandard. Although it is in 3D, it looks blocky and choppy. Moreover, it’s obvious to tell which type of character the game developers favored. Almost all of the female characters look much better compared to their male counterparts.

In spite of the dated graphics, the game features is interesting enough to warrant a try. Once you get acquainted and get used to the system’s gameplay and learn to not pay too much attention to graphics, then this game can give you a good time.