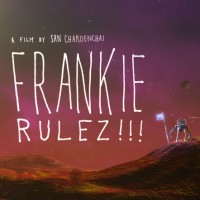 In just about five minutes, watch Frankie the space alien as he takes over the universe by claiming property over planets one by one. Written and directed by San Charoenchai, this short film has already taken over the animation landscape as it won three Best Film awards this year and numerous selections in various film festivals.

The colors used gave the setting a somewhat dark feel to the film. And while the pacing and movements were slow despite the crimes in space involved, the creators of the film were able to perfectly reflect the mood of the very short story. The setting was made to be as fairly accurate as possible, too.

Having the same head gear as Toy Story’s Buzz Lightyear, Frankie appears to look like a robot, too–but awkward looking at that. More amusingly, the two seemed to have been created to appear as if they should lead everyone else around them.

At first, you would think that the video or computer game-like animation and sound effects were safe and comical enough for kids of all ages. That is true, of course, before Frankie starts killing inhabitants of different planets and slicing planets in half.

To show that he has conquered a planet, he plants his personalized flag on the surface of the planet just like what the astronauts did years back. He seems indestructible. But see what happens to him as he came to found his match.