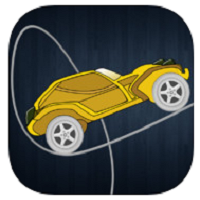 Skycar Racing is a physics based car game from Single Tusked Games, and it offers a nice mix of engaging gameplay and challenging physics. Because of this element, you won’t be able to perform any crazy stunts here, but that doesn’t make it any less enjoyable.

The objective in the game is to go over obstacles and wire tracks without losing control. Since this is a physics based game, you can’t just breeze through the obstacles like other games. Instead you’ll need to be careful as a driver and try not to hit anything. You need to avoid going through the red signal, the cutter and pusher.

Skycar Racing isn’t complicated, and while gameplay is more challenging than others, the controls are easy to figure out. There are also several cars to choose from, adding to the diversity. The graphics are smooth and clear, and the physics simulation is one of the best you’ll see on mobile.

The more you play Skycar Racing, the more coins you’ll earn that you can use to unlock other cars. And the game comes with a lot of humor too, as the obstacles are quite hilarious. The first level isn’t that hard, and it gives you the opportunity to get a feel for it. As you advance to the succeeding levels, you’ll need to avoid bigger obstacles like airplanes and asteroids.

Skycar Racing also has a booster that you can use to avoid some obstacles, but you need to make sure that you use it at the right time. Finally, you can share the results with your friends, a nice touch.