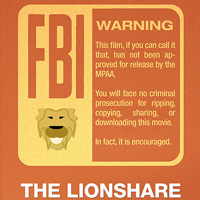 The Lionshare is the debut feature from writer/director Josh Bernhard. Shot the independent, almost student way – with consumer video cameras, barely any lighting or audio equipment and friend actors on a close to nothing budget – its an engaging, young movie definitely worth a download.

Relying on naturalistic dialog and a barebones aesthetic to match the bare honesty of its characters, The Lionshare is a personal look at life and love in an increasingly impersonal world.

The movie is a reflection of how we are living now, as we increasingly relate to each other through the music we listen to and the media we consume; where people communicate through internet memes and pop culture references. The Lionshare demonstrates how the medium has truly become the message.

THE LIONSHARE Trailer ‘A’ from Joshua Bernhard.

The movie grabbed out attention when it was first released on VODO network – it was the first feature we came across that dealt with file sharing – and we must admit we were impressed. The movie held us entertained and interested for over 60 minutes without a problem and if you’ve tried to watch as many indie movies as we did, you know that it’s a great complement in itself.

Watching The Lionshare sort of felt like observing a week from our own lives back in a day… It seemed honest, straightforward, with realistic (although not very character-revealing) dialogues and true-to-life scenes.

Nick (Mike Pantozzi) gets his girls the same way he gets his music: online. On a first date, Eva (Jessi Kneeland) invites him to an exclusive filesharing community called ‘The Lionshare’. From there, Nick’s own creative frustration fuels his consumption of pirated music and other media while he produces nothing of his own. Eventually, he finds inspiration in the unlikeliest of places.

Yes, the movie feels very low budget – because it is… And yes – it has some technical issues here and there… who cares! The storyline is good enough to carry you through it all and if you think about it, the ‘mistakes’ just make the movie more real and relevant.

BEARFACT: It’s a great piece of indie cinema and it’s FREE – watch it!.

The Lionshare is distributed under a Creative Commons Attribution-Noncommercial License, so feel free to share it with your friends and even remix it if you would like to! Don’t forget to donate to the creators or buy the DVD if you really like the movie and check out some of the movies social networking sites listed below.

This torrent download is packaged with an impressive 3-minute animated short “Legacy” by Grzegorz Jonkajtys.

This work is licensed under a Creative Commons Attribution-Noncommercial 3.0 United States License.