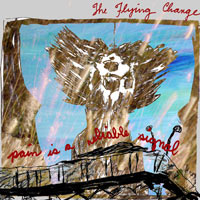 The Flying Change – “Pain is a Reliable Signal”

The Flying Change is stage name of a New York songwriter and performer Sam Jacobs. The name was inspired by poetry of Pulitzer-prize winner writer and family friend – Henry Taylor and it suits him extremely well. After listening to the album I couldn’t stop thinking that “Pain is a Reliable Signal” resembles a collection of poetry in which Sam Jacobs beautifully reveals his life experiences with pain though themes of love, loss and reckoning.


From “Pain is a Reliable Signal” Press Release:

Pain is a Reliable Signal draws deeply from the endless medical journey into which Jacobs and his family have been thrust. Four years ago, Sam’s wife began experiencing severe sciatic nerve pain, leading to the discovery of latent spinal birth defects. A neurosurgeon at Georgetown Hospital performed two experimental surgeries. Not only did neither alleviate her sciatica; in fact, they created new debilitating back pain. Further consultations led the couple to Rochester, Minnesota, hoping for a Hail Mary cure from the Mayo Clinic. Instead, doctors informed them they knew of no remedy nor treatment. His wife continues to suffer from physical pain, her condition interrupting the future they’d intended and the plains they’d laid. (…)

Brill and Jacobs gathered these musicians to create a sound they’ve dubbed “landscape pop“. Says Jacobs, “during early editing sessions, Paul went through the songs with a red pen and we kept editing and editing until they were as tight as possible. At the same time, we wanted every moment to be incredibly vivid. Small fragments of melody and emotion.” These moments are everywhere on the record, from the inverted swells of the pedal steel on the opener “Broken Bow” to the swirling ghostlike sax solo on “Hold My Heartache.”

While performing regularly in New York, blogging about his take on the future of the music industry, living the married life with his wife on the Upper West Side, and donning a suit during the day, Jacobs continues to grow as a writer and has been harvesting new songs by the batch. Stay tuned for much more from Sam Jacobs and The Flying Change in the near future.