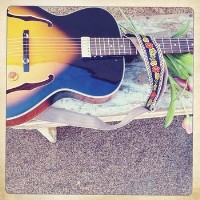 Amber Rubarth’s music goes well with that cup of coffee while staring out the window and enjoying the quiet morning.

Thanks to this mesmerizing capacity, it’s no surprise that Rubarth was hailed by Deli Magazine as the Best of NYC Songwriter. Her songs spark a sense of pop adventure while also exploring the quaint charm of a girl in the big city.

She’s released several albums so far but this is the first free compilation she’s put out. It’s a collection of singles taken and compiled from every album she’s released.

Perfectly capable of evoking emotion with simple guitar strumming, deft lyrics and soulful voice; it’s easy to like what the singer has to offer.

As mentioned, this free EP is a compilation of tracks culled from her full length LP’s. Storms Are On the Ocean, kickstarts the mini album and emphasizes the singer’s charm. Providing a spotlight in her voice and accompanied with the right instruments, she transforms simple songs into an emotional-filled cut.

Pilot, is a track from her Good Mystery album which was released back in 2009. Washing Day, on the other hand, was co-written by Adam Levy and won them them 1st place in the International Songwriting Competition at the Lyrics category. The contest was judged by prominent musicians, Robert Smith, Tom Waits and Brian Wilson.

Despite having less than 30-minutes running time, the EP serves as a great introduction to the singer/songwriter. It’s filled with cuts that echo sincerity and sweetness; definitely a charming piece that could become your favorite.