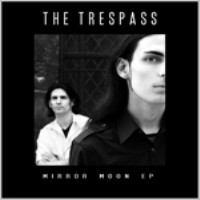 Electro pop, new wave, glam with a touch of the 80s. Initiated as a simple project in 2001, The Tresspass is the brainchild of twin brothers Vincent C. (aka Blackell) and Benjamin C. (aka Kruwll).

Their sound is a mixture of pop, rock, glam and new wave with long synth backgrounds and almost robotic vocals. They eerily sound like Inxs meets Nine Inch Nails along with an 80s tinge, which is unsurprising since the band cites them as among their primary influences.

Mirror Moon is perfect for those who long to listen to an updated, electronic version of some unforgotten track from the 80s. It’s not for everyone, but the band fills a niche that so far has gone unfilled.

Taking their 70 and 80s post punk, new wave and glam rock love to new heights, the band pretty much carved their own niche in the alternative French music scene. The band initially recorded several singles as well as EPs and distributed it by themselves. Doing what they can to spread their music among the local scene. Because of all that hard work, not only local music lovers took notice of the band, but they have also gained a sizable following in the international goth community.

Although the songs might not be ideal for every music lover out there, it is a great listen if you love the goth, post punk 80s feel in songs. Like anything new, it takes a while for you to get used to the style and sound especially the vocals, however, the rhythm and beats are instantly alluring. Personally, I would have liked it more if the vocals were muted out, leaving the rest of the instruments to dominate, but that’s just me. Have a go at downloading this one. It’s available under a creative commons license and won’t cost you a single cent.