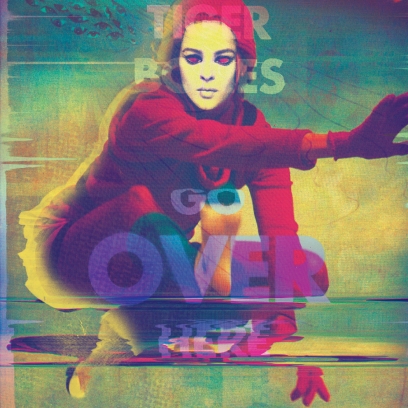 Tiger Bones is a four piece self-described “weirdo surf rock band.” They might sound “weird” but they definitely know how to catch the listener’s attention. Go Over Here is the group’s debut compilation and it’s filled with hazy vocals, some funky 70s style rock and an overall great mood.

The record is produced by Jered Gummere from Pony and features four tracks that’ll easily get you grooving or if not, will make a convert of you in no time.

Built up with dreamy distortions and non-prominent vocals, Go Over Here is a treasure trove for lofi indie pop punk lovers out there.

Starting out the album is Kill Them. Easily one of the best cuts from the record, the song echoes the band’s style best. Native, meanwhile, treats listeners to a set of deft guitar strumming and a post punk, ominous feel. The first parts of the track feature an indistinct sample of people noise.

Fourth track, Eyeliner, is more new wave pop oriented. Those catchy rhythms and hazy vocals that the band has come to master are ever present here. Meanwhile, closing single, Transmission, gives a nod to a band that certainly shows a hint of influence on the group’s sound, Joy Division. It’s a cool cut that rounds off the album experience nicely.

Go Over Here captures your attention and makes sure it doesn’t let go. For some, it might sound weird but overall, it’s a great find. If you like this kind of music, make sure to grab the download. It’s for free!

You can also show your support for the band by grabbing the 7 inch vinyl version.