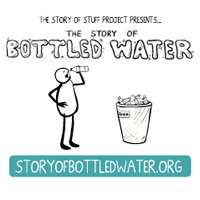 The Story of Stuff Project is behind the original animated video “Story of Stuff”, which has earned more than 10 million views since it’s release in December 2007.

“Story of Bottled Water” is a short, simple, informative and at the same time entertaining animated short that exposes the hidden dangers and irrationalities of drinking bottled water most of us don’t think about when we spend $1 or more at the store.
Watch it and pass it on!

The Story of Bottled Water employs the Story of Stuff style to tell the story of manufactured demand, specifically how
you get Americans to buy more than half a billion bottles of water every week when they can get it almost free from a tap.

Over seven minutes, the film explores the bottled water industryŌĆÖs attacks on tap water safety and its use of seductive, environmental-themed marketing to cover up the mountains of plastic waste it produces. The film concludes with a call for viewers to make a personal commitment to avoid bottled water and support public investment in clean, available tap water for all.

The Story of Bottled Water is being released on World Water Day, an annual UN-sponsored day of action to support access to clean, safe water for the worldŌĆÖs people. Globally, more than 1 billion have little choice but to use potentially harmful sources of water, leading to what the World Health Organization calls ŌĆ£a silent humanitarian crisis.ŌĆØ Meanwhile, many Americans, who generally have access to safe and abundant water from the kitchen tap, drink bottled water despite the enormous waste of money, energy and resources it represents.

The filmŌĆÖs release comes as the practice of bottling water is coming under increasing fire, with major companies like Google and cities from coast to coast starting to ŌĆśthink outside the bottle.ŌĆÖ A Harris Poll on environmental behavior conducted this past fall found 29% of those surveyed reported switching from bottled water to tap in the past year.

ŌĆ£Cities and states are spending hundreds of millions of taxpayer dollars on bottled water, and thatŌĆÖs not to mention whatŌĆÖs spent to deal with all the plastic bottles that are thrown out,ŌĆØ said Leslie Samuelrich of Corporate Accountability International. ŌĆ£It sends the wrong message about the quality of the tap. What if we instead spent that money supporting public water systems or preventing water pollution in the first place?ŌĆØ The organization is releasing its second
report on state spending on bottled water on March 23, calling on public officials to buck the bottle as was done last May in New York at their urging. (www.StopCorporateAbuse.org)

The Story of Bottled Water companion website (www.storyofstuff.org/bottledwater) will serve as an interactive launch pad for information and activism. The site offers viewers a series of ways to get involved, including links to the partnersŌĆÖ campaigns, as well as downloadable resources and information, including an annotated script.

ŌĆ£Bottled water usage is in decline in the United States for the first time in three decades, thanks in part to the hard work of our partners on this film. We hope this film helps to drive the final nail in this huge rip off,ŌĆØ said Annie Leonard, Director of the Story of Stuff Project.

The Story of Bottled Water is the second in a series of five new short films that The Story of Stuff Project is releasing this year with Free Range Studios (www.freerangestudios.com) and more than a dozen of the worldŌĆÖs leading environmental organizations. The first film in the series, The Story of Cap & Trade, was released on-line in December 2009 and has garnered over 600,000 views. The original Story of Stuff has been viewed over 10 million times since its release in December 2007.

For more information, you can download a nicely formatted pdf entitled “Bottled Water Myth Versus Reality” and the entire script of “The Story of Bottled Water”.