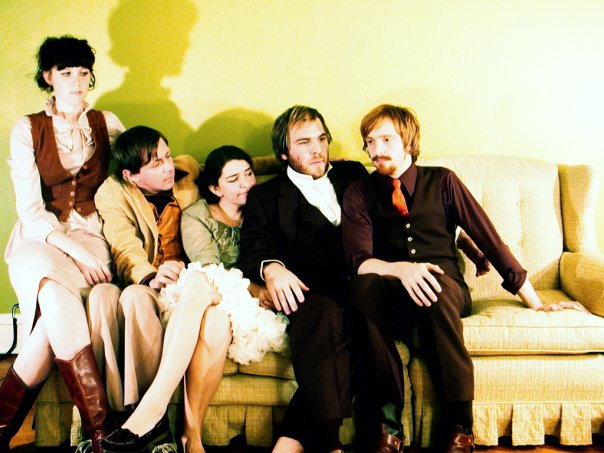 Grace Notes is Notes & Scratches newest release with four sad songs about departures. Speaking of departures, the band actually departs from its usual sound – the songs don’t have a “celebratory feel”, which is the band’s trademark. For Grace Notes, they handpicked four songs which are melancholic, pining, and lonely. The album takes its time, like footsteps dragging where they don’t want to go, with trumpets and viola on the background to set the mood. For sure, it’s an album to listen to on difficult goodbyes.

Notes & Scratches has been around since 2005, playing acoustic/pop/rock and practicing on “a small very cold or very hot garage behind Robbie’s apartment in Chicago’s Rogers Park neighborhood”. Anika Balaconis plays trumpet, organ and vocals, Jason Eckerson on bass and vocals, Joshua Dumas on guitar, vocals and lyrics, Robbie Hamilton on drums and vocals, and Whitney Johnson on the viola and vocals.

How was Grace Notes created?

Well, it is an in-between record. When we realized that our last EP (To the Other Side) seemed to have a kind of musical/thematic arc, that meant we needed to cut some the songs we’d been working on. And now, as we put the finishing touches on our upcoming record (In the Doubtful Sound) certain songs again, do not seem to work.

Grace Notes, is those songs. Oddly and fortunately, though they haven’t fit elsewhere, they do seem to sound nice together!

What is the inspiration behind the four songs in the EP?

Hmm, talking about inspiration is always so difficult. I think region and landscape had a large influence on Grace Notes. These songs definitely feel like the American Midwest to me; in some songs specific midwestern cities are even mentioned. Though we live in Chicago we have been doing a lot of recording at Pieholden Suite Sounds in Rantoul, Illinois, which is a town of like 8,000 people surrounded by corn and dirt and wheat and cattle and more dirt. I think some of those sights found their way into the imagery of these songs.

And, like every song I seem to write, there is loss, travel, love, and memory in these songs too!

What’s next for Notes & Scratches?
First up is a final recording session for In the Doubtful Sound. We’ve been working on that record sporadically since January and have just two days of actual recording left. Then we’re working on a mini-tour in late October. And then we hope to release Doubtful Sound sometime in late November, early December.