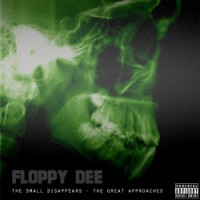 Punk pop rock sound with emo-ish vocals to match. Floppy Dee certainly hits the nail right on the head when it comes to a pop punk emo mash-up. It’s not just the loud thrashing guitars and beating drums that make it sound like any emo punk band struggling to gain ground, but the vocals certainly add to it as well.

Although anti-emo punk people might find music like this hard to swallow,  The Small Disappears, The Great Approaches is definitely filled with good tracks that are worth the listen especially if punk rock/emo music runs in your veins.

The Small Disappears, The Great Approaches is the first full length album released by Germany based singer/songwriter Floppy Dee. The album was released on January 22, 2010 and has been available for download under a creative commons license.

Little information is available about the singer, although he does have various websites. However, as to how he got started and all, it’s hard to track him. So far, he’s released an EP (Climate Change) as well as a single (Use Your Mind).

As for this album, it has 10 tracks for you to enjoy, starting off with Intro which is a mix of random sounds. In fact, it’s a recording of someone transferring from one radio station to another, purportedly looking for the right song. Then it stops to a heavy punk rock song. The second track is Drowning in Jealousy, which is probably one of the most likable tracks of the entire album. It’s  as emo and punk rock as can be. Delivering slightly nasal, high pitched vocals and guy longing for girl lyrics. This doesn’t necessarily mean it’s bad, of course, since there are plenty of rockers out there who live for music like this.

The Small Disappears, The Great Approaches is an album that’s worth listening to if you love punk rock and don’t mind the emo touch it exhibits. The sound and instrument work are good and definitely worth praise.