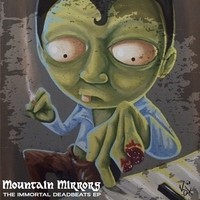 Dark, Zen-like, melancholic acoustic rock from the backwoods of Massachusetts. Released in April 2009, The Immortal Deadbeats is the fourth album from eerie rock group Mountain Mirrors.

Brainchild of Jeff Sanders while incarcerated in some deep dark wooden forest reminiscent of Tim Burton’s Wonderland; Mountain Mirrors is a collective collaboration with various other artists. All lending their talents, expertise and idiosyncrasies into creating this engaging 4 track EP.

With a penchant for the offbeat, The Immortal Deadbeats EP is an endearing collection and a promising taste of what to expect from the group in the near future.

The Immortal Deadbeats EP doesn’t alienate fans who have listened to Mountain Mirrors and the follow-up release Ripple Effect, but to those who have exclusively listened to Dreadnought, this might seem like a darker set of tracks. But in reality, this EP settles itself right in the middle; combining that shiny less brooding touch in Dreadnought to the heavier and darker acoustic side of the first two albums.

Owned Again is reminiscent of the dark popular acoustic style that has gotten the band its reputation as a psychedelic Zen rock sounding band. However, what’s more apparent with these set of tracks, in particular, is that they incorporate more synth sounds than their previous compilations.

With a growing dependency on synth and less prominent acoustic guitar sound, Mountain Mirrors delves full blown into psychedelia as opposed to teetering around its edges like in the previous releases.  Each track conjures up a head trip characteristic of some elicit substance that your hippie parents were a fan of.

However, just when you think they’re too far removed, then comes the title track “Immortal Deadbeats” which was described as “borrowing from the acoustic guitar riff factory of Days of the New.”

Listening to this mini release is certainly a pleasure like no other,  especially if you like to mix psychedelia with your acoustic rock and roll. Great vocal work and tight beats makes this EP worth playing over and over again.