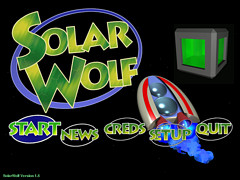 SolarWolf is an updated clone of a 1983 hit arcade game SolarFox for Atari 2600. It’s available for all operating systems (PC, Mac, Linux, BeOX, Unix platforms) and it’s very easy to loose lot’s of time playing this game going back on the memory lane. The objective of the game is to get through 60 levels collecting space boxes and of course each level gets is harder than the previous.

SolarWolf has been described by GameSpy as a “strange hybrid of games. It’s part Pac-Man, part Q-Bert, and part Dodgeball.”

The object of the game is to pilot your ship with the arrow keys across a rectangular play area to collect all of the cubes in the level. However, while doing this, four enemy fighters (one of each side of the screen), will launch fireball-like rockets at you; if hit, you will lose a ship. If all your ships are lost, you will lose the game. Each level has a timer on the right side; should the player complete the level before the timer runs out, they can skip the next level entirely.

As the game goes on, more challenges emerge. The enemies fire more rapidly, obstacles such as asteroids and spike mines appear (colliding with either costs the player a ship), as well as the introduction of yellow blocks (which require two passes to collect) and red blocks (requiring three passes). Later in the game, a hidden spike mine may emerge from any yellow or red block.

During the game there are several power-ups that the player may collect, including:

* an increase in the skip level timer
* an immediately evaporation of all enemy fireballs from the screen
* destruction of one of the four enemy ships
* a temporary shield (which only protects the ship from fireballs)
* a temporary slow-animation power-up (which reduces the speed of objects).
* an extra life

If the player loses the game, they can later continue it from a saved file menu.

According to the author’s website, his own personal best score is “in the 40’s.” The best reported score on the same website is 15 ships and 26 skips. Scores as low as 13 ships with 25 skips have been reported on various websites.