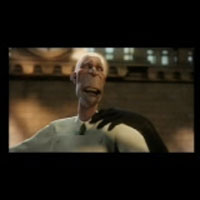 Work In Progress is an enchanting animation ready to take you on a journey into the fantastic workshop hidden deep down in the world of natural wonders. The workshop occupied by two peculiar inventors is a perfect location for their latest creation. However, as the inventors squabble over the concept and implementation of their latest project a mysterious third party comes along to provide the most important and still missing ingredient – a little touch of magic. Despite being released all the way back in 2001 the animation still offers some great visual experience to its viewers compared to other short films of the last decade.

The animation is not only a three-minute-long visual snack but a reminder that we all need a little bit of imagination that will surely make our lives that much more magical.
As one of the main characters in the story, a tall and thin inventor with just a hint of white smoky hair talks with his chubby, cigar smoking assistant we quickly learn that the two have already created all of the animals of their world. However this long and tedious task was possible only with a help of no one else but a little girl who with the use of magic dust made the creations come to life in their full glory. This time would be no different as it is her “ladyship” who comes to save a day bringing a huge gorilla, the newest creation, to life.

Although the released on the Internet Archive copy of the animation might be lacking in the quality in which it was created, with a little imagination we could surely imagine its original splendor. Work in Progress was in fact a work by some of the most creative people at the Academy Award winning motion picture visual effects company Industrial Light & Magic, owned by Lucasfilm (the company that stands behind some of today’s greatest hits, including Star Wars, Indiana Jones, Harry Potter, Jurassic Park, Ghostbusters II, Star Treck, Transformers, and more recently Avatar, receiving – as of 2009 – 15 Best Visual Effects Oscars and 23 additional nominations).