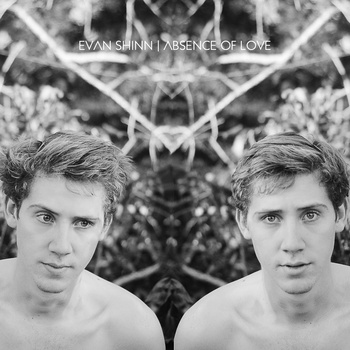 Immerse your senses in blissfull pop folktronica with Evan Shinn‘s Absence of Love.

Approaching with steady drum beats, Nothing To Fake welcomes the listener with nostalgic piano keys and an explosion of electro spurs and hand-clapping rhythms.

Leaning a bit more on the folk acoustic department, Hold Me Down shows a guitar-strumming Evan Shinn. Press play and let this saccharine ensemble calm your senses.

Following with an atmospheric mood, When She Falls Asleep explores ambient tunes and ethereal sonic spaces. This is sonically different but Shinn still succeeds to deliver this with flying colors.

A personal pick, I Fell Astray shells out a nostalgic vibe with choral-layered vocals and steady psychedelic beats. Air of Finality closes the album with a stripped down folk pop serenade. Shinn’s brilliant voice shines through as subtle melodies blends perfectly with his beautiful voice.

In Absence of Love, the artist has created tracks that are not afraid to go beyond their own territories. Shinn’s courage for experimentation has produced a splendid album that surprises the ears with each track.