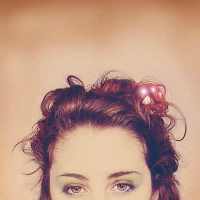 Here is yet another outstanding album from Emmy Curl. Ether is the young artist’s 2009 EP before Origins which was also featured on FrostClick/FrostWire.

The album offers the best of the artist’s first songs, all recorded and mixed by Curl. Get ready for some lucid dreaming and sonic pleasure as Ether features nine tracks of acoustic dream pop.

Stream follows up with a kick of acoustic emphasis. The simple arrangement highlights Curl’s vocals which is effortless, not too sweet, and extremely listenable.

Merlin The Cat is Missing came from the same melodic mold with the previous pieces except that it has a thicker and lower cadence. Sailor on the other hand is a relaxing piece. Close your eyes and let the acoustic strings flow seamlessly with natural sounds of crashing waves.

Emmy Curl gets my vote as one of the most talented ambient artists I have encountered in years. If you’re a fan of ambient, moody, dream pop, or just good music in general, then Ether EP is a good choice.