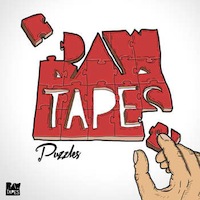 Expect nothing but well-tailored beats and impressive arrangements. Puzzles, an 11-track album by the 11 beat makers and producers of Raw Tapes, was released last January 2013.

Owned and operated by Osbourne “Ease” Green, Raw Tapes Records have been releasing outstanding records since 2010. Capturing the combined talents of different producers, beatmakers, and musicians, Puzzles presents what Raw Tapes Records wants to deliver—a homogenous, yet distinct soundscapes that will bring you on the right mood.

The flow of the first track, Headaches, is perfectly structured from the beginning up to the last. There is an authentic, electronic hip-hop feel about this track, which definitely reflects that the producers of this album really want to serve palatable tracks to the listeners.

Following the first track is another flawlessy-weighted hip-hop record, KerenDun’s Won’t You Stay. The soft beats offer a hint of seduction and sophistication, making you want to stay for more.

Closing this collective record is Mad Steve, leaving the listeners with the impressive and sultry track entitled What I Mean.

Puzzles is definitely not your typical hip-hop album. Straying away from the archetypal spluttering of brassy beats, this record boasts of refined and laid-back tracks.