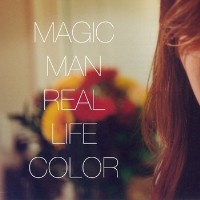 Dreamy and magical seem to best describe Magic Man. Partners in crime, Sam Lee and Alex Caplow join together to create a beautiful mix of simple indie synth pop tracks that at parts will lull you to sleep and also perk your day right up.

Real Life Color is their debut compilation. According to the boys, “the songs were written at several different locations in France, including a chateau, a farm, a circus festival, a beach cottage and brought back home to the states for further recording and editing (most of which was done in small dorm rooms and transmitted between band members with the aid of the world wide web).”

The boys are based in Boston, but as mentioned, much of the songs were recorded while they traveled the French countryside. This little countryside escapade resulted in ten tracks of electro synth pop goodness. There’s a touch of folkiness to the songs too but it still emerges as an electronic pop compilation that’s heartwarming.

One of the best things about the album is that it flows seamlessly throughout. Each song complements each other and the boys never deviate from their core sound. For instance, opening single, Swell Song is an ambient electro track filled with a random mix of chatter, synths and a steady beat. It transitions beautifully into the next track, Monster which contains vocal lyrics, a danceable beat as well as a dreamy, relaxing vibe.

Although there are tons of notable cuts on the record, it’s best recommended to listen to the entire album from beginning to end. The soft muted synths and subtle electro pop feel adds the right touch, preventing the songs from turning into a mopey affair or an all-out rave soundtrack. Moreover, if you listen closely, the lyrics are beautiful and sincere.

Real Life Color is best served on laid-back and quiet mornings. It perfectly captures happy and fleeting moments at once and doesn’t overwhelm listeners. Perfect for fans of Vampire Weekend. You can grab the download absolutely free. This is a worthy find.