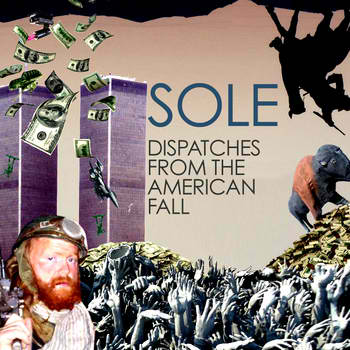 Sole: Dispatches From The American Fall

When it comes to expressing thoughts and views into music, Sole is one emcee that delivers his mind loud and clear through his tracks. Dispatches from the American Fall is the latest compilation from the outspoken musician whose real name is Tim Holland. Based in Portland, Maine, he founded and managedthe label, Anticon. He has also been a part of groups like Live Poets, So Called Artists and Deep Puddle Dynamics to name a few.

This 23-track mixtape contains cuts filled with scathing thoughts and diatribes about the system. Whether it’s about economy, society and the perils of living in an “evil” empire. The tracks feature soliloquies gathered over a decade and layered over catchy beats. It’s an interesting record that should feed your political and revolutionary inclinations.

This huge compilation opens up with some strong words in I Think I’m Ben Bernanke. The track showcases some Gregorian-style chanting with a rap soliloquy about the state of capitalism and perils of commerce. The forceful rapping and the catchy beats is eye opening; delivering a great impact to the listener while opening up the record nicely.

Living in the End Times, meanwhile, combines a bit of R&B and rap touch while All Tomorrow’s Sewers delivers a more trip-hop feel to the album. If there’s one thing that ties together the record, it’s the strong and catchy lyrics along with the expertly created beats.

As mentioned, the tracks were created from a collection of old material spanning from over a decade. There are a few surprises in the record too including awesome collaboration from musicians like Sound, Lil B, Astronautalis, B. Dolan, Mac Lethal and Jared Paul to name a few.

It’s a stirring album that deserves a listen. Whether you’re there to enjoy the lyrics or to listen to the cleverly done beats, the album will be quite a treat. Take a listen. It is available for download over at BandCamp.