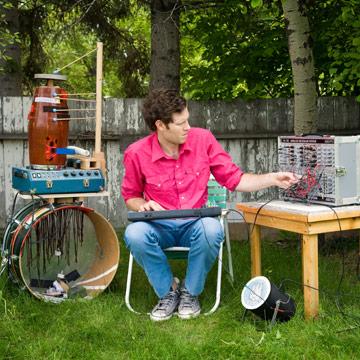 Canadian singer, Chad VanGaalen, released a wonderful sounding experimental indie rock album “Soft Airplane” last year. And after exactly a year, Chad, together with his record labels, Flemish Eye and SubPop, released “Soft Airplane – B-sides EP,” last September 15, 2009. If listeners loved his other albums, then they will surely love this one more. Chad is not only a musician he also designs his own covers for his albums. He loves drawing and illustrating. Combine that with his unique choice in music, did free himself from the ordinary indie folk rock genre.

Even his record label claims that Chad has an uncanny taste, but is very creative of what he does. He doesn’t just keep it to his own. This is the reason why released Soft Airplane – B-sides EP. In this album, he shares a piece of himself to his listeners. The album is very intimate and one of a kind. Each song is different in its own way, but in general, the whole album sounds very futuristic.

The Soft Airplane – B-sides EP has 9 tracks:
1. Stuffed Animal
2. Are You Sleeping?
3. Microscopic World
4. Soak In Visions
5. Pyramids Float
6. Twisting Magic Up
7. Did You Find Peace?
8. I Wish I Was A Dog
9. Corvette
All songs were composed, sung, and arranged by the Chad VanGaalen.

This album projects Chad VanGaalen’s confidence to be different; it also stands as an encouragement, as well as a challenge, to other singers to show their artistry. Soft Airplanes – B-sides EP is indeed one of his boldest albums.