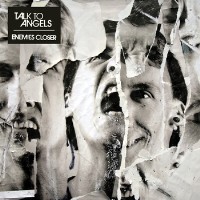 Talk To Angels may not be a household name just yet but the four-piece crew have been improving their craft and gaining a steady audience over the years.

Made up of Craig Kaye – vocals/guitar, Mickey Dale – keyboards/guitar, Lee Waud – bass and Danny Cookson – Drums; the band formed after meeting at a house party and agreeing to clean out Mickey’s garage in exchange for one-week use of his studio. Something sparked during the sessions and they eventually formed into a band.

Enemies Closer EP is a first for them and it’s filled with alternative pop rock goodies that might pique your interest.

Sounding like a mid-90s hipster punk movement, Talk To Angels delivers an anxious opener in title track, Enemies Closer. With a catchy poppy beat, running guitar riffs sprinkled with the occasional twinkly sound at the background, the song asserts the band’s presence effortlessly.

On the other hand, middle tracks, She as well as He Loves Cilla, are quieter and feature a melodic pop rock vibe. The songs are occasionally interlaced with pianos and softer vocals for the former and heavier guitars on the other, showcasing the band’s range of style.

Final track, GDR, is even slower, with the boys entertaining a more classical acoustic approach. Employing strings and a slightly classical rock feel, they pull off an ambitious track pretty well.

Overall, the EP features different facets of the band’s abilities. Some of it a hit while others are slightly off the mark. The good thing is there’s definitely talent there, they just need to decide which direction they would want to trek on and improve on that. Give this a listen and see if you like it.