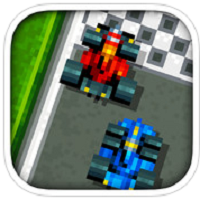 Mini Turbo GP from redBit Games is a retro racing game that packs a lot of adrenaline. The game boasts of several challenging tracks as well as numerous cars, meaning you’ll be spending hours playing this game. Plus the more you win, the more tracks and characters you can unlock.

Mini Turbo GP has a lot of playing options, but to get the most out of the game you should play in career mode so you can work your way up from the bottom all the way to the top and become champion. The gameplay is solid too and you’ll get a kick of watching the mini cars go full throttle. Aside from winning the races, another incentive is unlocking new tracks and cars, making the game even more fun.

Aside from the tracks and characters, Mini Turbo GP also has secret characters that you can unlock, and they include aliens and zombies, which can make the game even more interesting. Apart from the main race, the game also has special modes such as Crush Chickens and Knock Down Cones, increasing its playability and longevity.

In addition to this, Mini Turbo GP has a lot of special vehicles available such as classic F1 cars, the Mini, ice cream trucks and many more. There is also a Facebook sharing feature and you can go up against 10 players online, making this a game you can enjoy with friends. Given all the features in this game, it’s easy to see why it has become popular with a lot of gamers.