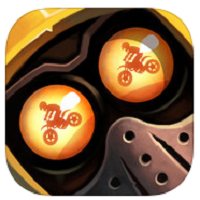 Trials Frontier is a racing game for the iOS, but publisher Ubisoft has upped the ante by implementing physics based tracks, making the game more challenging. Now you have to challenge yourself and your friends on the Global Leaderboards on a variety of tracks that push you to the limit.

Trials Frontier doesn’t just have an assortment of tracks, but it also has a lot characters as well. Trials Frontier, while challenging, has some pretty nifty controls and seems well-built for use on touchscreens, and the physics-based gameplay provides excitement and keeps it from being too easy.

Trials Frontier has a lot of missions and they are diverse so it’s a lot of fun. The gameplay is immense totaling more than 50 hours, so this isn’t one you’ll go through quickly. There’s also a story here somewhere here, but it’s really just a backdrop for the racing and the environments. The settings vary greatly so playing doesn’t get monotonous.

The graphics are very good, and coupled with the different tracks and missions, you’ll be playing Trials Frontier for quite a while. The more you race, the more you’ll earn and be able to upgrade your ride and even get a more powerful bike. Aside from offering diverse surroundings, the game doesn’t require Wi-Fi to play.

Trials Frontier is not just your typical racing adventure game, as the combination of great graphics and engaging gameplay raise it above the stuff you usually see on mobile devices. If you’re looking for a racing game that will challenge you, Trials Frontier will be worth a download.