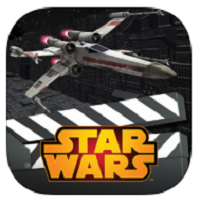 Star Wars Scene Maker free edition from Disney puts you in the shoes of filmmaker George Lucas. If you think that you can do better than George with the movies, now’s your chance, as Star Wars Scene Maker is exactly that: the app allows you to restore balance to the Force your way.

The app is basically a storytelling tool and you’re the director. You make your own scenes, select the characters, have full control over their actions, dialogue and record everything, like you’re making a movie. The free edition comes with the Battle of Endor set and you also get the top characters like Darth Vader and Hans Solo free.

As far as the tools go, Star Wars Scene Maker is complete with intro and credit crawl. There are a lot of features here but fortunately the interface is laid out clearly so you’ll have no problems figuring out how to use the app. Simply put the app gives you a taste of what it would be like to tell new Star War stories.

Although there are IAPs, the free edition gives you plenty to work with and you can recreate the Star Wars universe with numerous options. You can choose from different 3D environments with 3D models of weapons, ships and characters. You can record your own voice or use some of the dialogue in the film, and you can switch from different cameras. If you’re a Star Wars fan, this is an app you’ll want to try out.